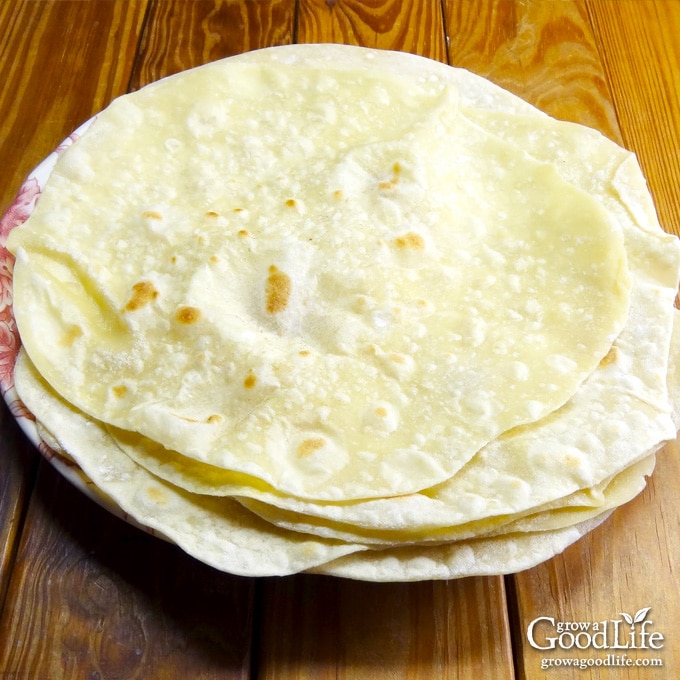 With all the Anaheim and Jalapeño peppers in the garden this year, I know I am going to be sharing several of our favorite Mexican inspired recipes. I wanted to be sure to include my go-to flour tortilla recipe.

We use these homemade tortillas for many things from fajitas, sandwiches, breakfast burritos, enchiladas, quesadillas, and soft tacos to simply wrapping up a salad for an easy to eat lunch when we are on the go.

Making great flour tortillas is not as complicated as it may seem. The key to a perfect, light, and airy tortilla is having the right ingredients and technique.

Flour: This recipe uses unbleached all-purpose flour for a soft, pliable flour tortilla. However, you can use other types of flours with some slight adjustments:

Salt: The salt is simply added for flavor and can be left out if you are watching your sodium. I use kosher salt or Himalayan salt in my kitchen, but any table salt will be fine.

Hot Water: Warm water helps to distribute the cooking fat evenly through the dough, and hydrates the flour quicker. Heat water briefly in a teapot or in the microwave. You want it warm to the touch, but not boiling.

Cooking Fat: I tend to use avocado oil because it is easy. I always have it in my pantry and it combines effortlessly with the other ingredients. You can also use use extra-virgin olive oil or vegetable oil in the same way.

Traditional flour tortillas are made using lard. Lard is rendered back fat or leaf fat from pigs. It’s rather difficult to find in my area, and I am not likely to render my own very often. Vegetable shortening or butter can be used in place of lard. Bacon fat works too, but adds a rich, bacon-y flavor that can overpower depending on how you are using the flour tortilla.

This recipe uses a food processor to make the tortilla dough, but you can also make it with a stand mixer or mix by hand.

If you are using lard instead of oil, add it before the water and mix until it is evenly incorporated into the flour, and then trickle in the hot water until a dough ball forms.

After the dough is kneaded, it is important to let it rest for at least 15 minutes before rolling. This rest period allows the gluten to develop resulting in more pliable dough that will be easier to roll. After mixing, transfer dough to a floured work surface. Cover with a clean kitchen towel to prevent it from drying out, and let the dough rest.

If you find your dough springing back as you roll it, it is too elastic and needs more time to rest. Simply cover it with a towel and let it rest 5 minutes longer.

Rolling a perfect round tortilla takes practice. More importantly is that you roll the dough thin so it cooks evenly.

After letting the dough rest, and before rolling the tortillas, you will divide the dough into eight even sized wedges. Then you will roll each piece into a smooth ball with a rolling pin.

Dust with flour as needed to prevent sticking. Keep turning the dough to roll the tortilla evenly. You are aiming for an 8 or 9-inch circle, which will make the dough about 1/16 inch thick, thin enough to see your hand through the opaque dough.

Use a Hot Skillet

Make sure to preheat your pan or griddle to medium-high heat, and that it is hot before browning your first tortilla. If you place your tortilla on a cold skillet, it will cook too slowly, dry out, and stiffen up instead of remaining pliable. If you end up with a stiff tortilla, break it up and use it for dipping into homemade salsa.

A full printable recipe can be found at the bottom of the article, but here are the illustrated steps for making flour tortillas from scratch:

In a food processor, combine flour and salt by pulsing several times. Combine the oil and water and drizzle it in slowly while the food processor is running. Process until the dough comes together and forms a ball.

Turn the dough onto a floured work surface and knead several times until the dough is smooth. Add flour if the dough is too wet, and extra water if dry. Form the dough into a ball, cover with a clean kitchen towel, and let it rest for at least 15 minutes.. 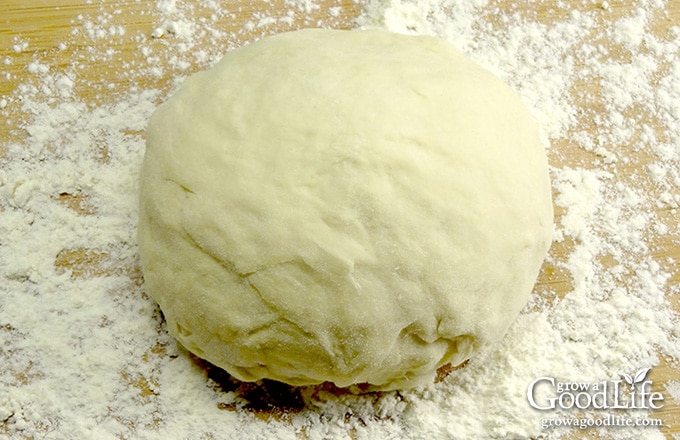 Step 2: Roll Out Your Tortillas

When you are ready to roll your tortillas, preheat your pan, divide the dough into eight portions, and roll into balls. 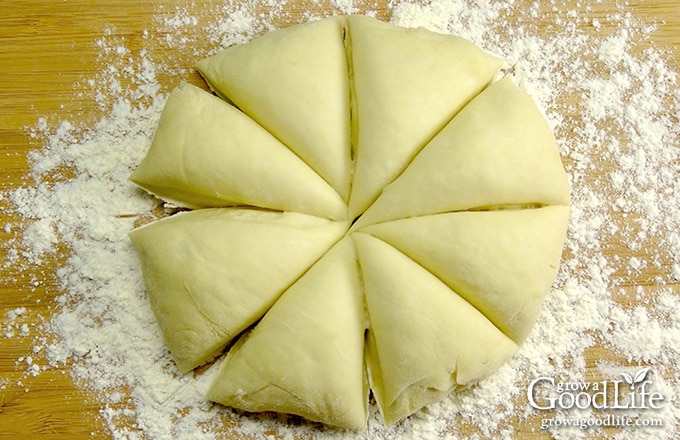 Work with one tortilla at a time. Sprinkle flour on your work surface and rolling pin. Flatten one dough ball with the palm of your hand, and use the rolling pin to roll each ball into an 8 or 9-inch circle. Dust with extra flour as needed to prevent the dough from sticking. Cover the dough balls in between rolling to prevent them from drying out. 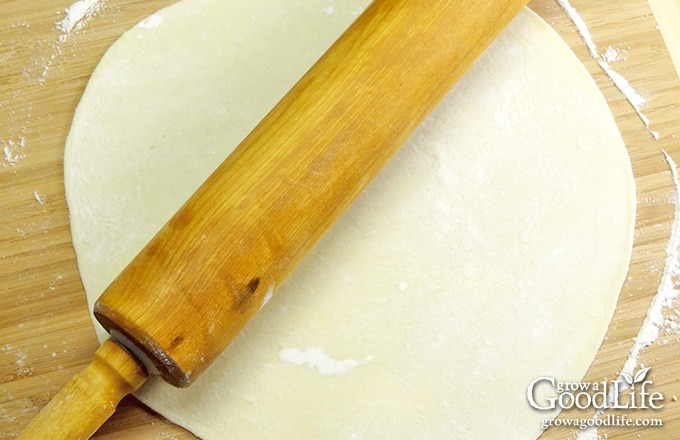 Cook the tortilla in a pre-heated, dry skillet. Once the tortilla hits the pan, it should begin puffing up with air bubbles. The tortilla is ready to flip when it is puffy and develops golden brown spots. Flip and cook on the other side until it is puffy and browns in spots. Place the cooked tortilla on a plate, and cover with a towel to keep warm. Repeat until all the tortillas are cooked. That’s it! It should take about a half an hour, and you’ll have fresh homemade tortillas. 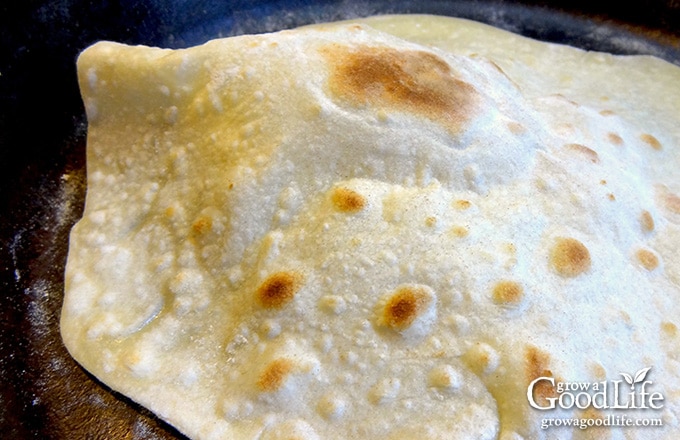 If your tortillas feel stiff after cooking instead of pliable, your pan may not have been hot enough, or you may have cooked them too long. Adjust the temperature if necessary, and only cook until puffy with light brown spots. If you find extra flour collecting in the pan, remove it with a damp paper towel, or it may add a burnt flour flavor to your tortillas. 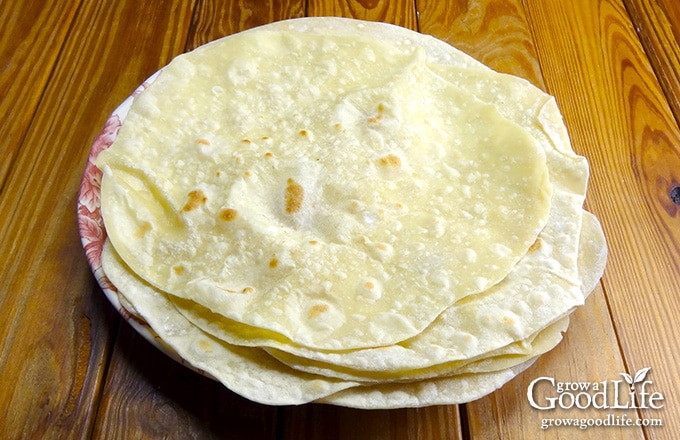 How to Store Flour Tortillas

Store extra tortillas in a zipper bag at room temperature for 24 hours, refrigerate up to a week, or freeze for longer storage.

Warm the tortillas before serving by reheating individually in a hot skillet, wrapped in foil in a warm oven, or wrapped with damp paper towels in the microwave. Thaw the frozen tortillas, and then warm before serving. 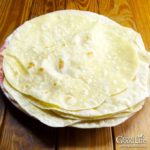 Previous Post: « How to Harvest and Dry Herbs for Storage
Next Post: How to Root Tomato Suckers and Grow New Plants »