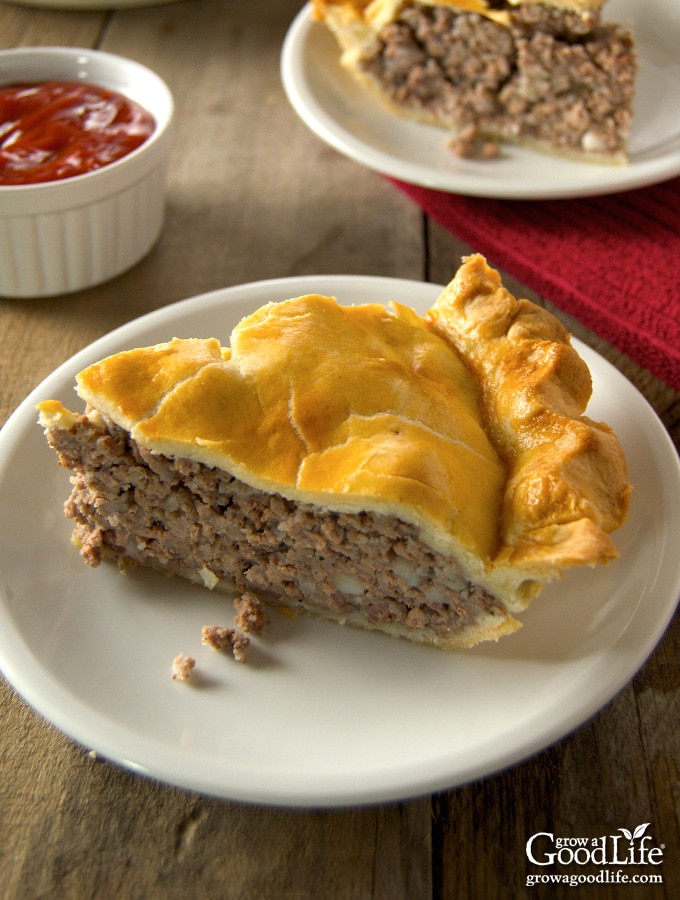 Employment opportunities at the many saw mills and logging camps drew numerous French Canadians south in several waves during the 19th century. Eventually, many French Canadians seeking work and preservation of their customs, language, and way of life relocated to New England towns. They settled, established Franco-American communities, and maintained their culture, language, and religion. My family is mostly of French-Canadian descent, and I grew up in a bilingual French and English speaking small town.

Tourtière, also known as pork pie or meat pie, is a combination of ground meat, onions, spices, and herbs baked in a traditional piecrust. There are many variations of tourtière throughout the regions of Franco-American communities and Canada and even among members of the same family.

Most recipes include a combination of ground pork and beef, but it is not unusual to include venison or other game meats in the pie. Almost every family had a tante or mémère (aunt or grandmother) who had a tourtière recipe with a secret ingredient or two.

Some versions of tourtière are made from only ground or chopped pork, but my family always made it with a mix of pork and beef. Several accounts suggested that using potatoes was frowned upon because that meant you could not afford meat. In this recipe, I feel the potatoes are essential to help bind the ingredients together.

Prepare your pie dough pastry and refrigerate until you are ready to use it.

Cook the potatoes in a pot of boiling water until they are tender. Scoop out about 1/2-cup of potato water and drain the rest. Mash potatoes and set aside. 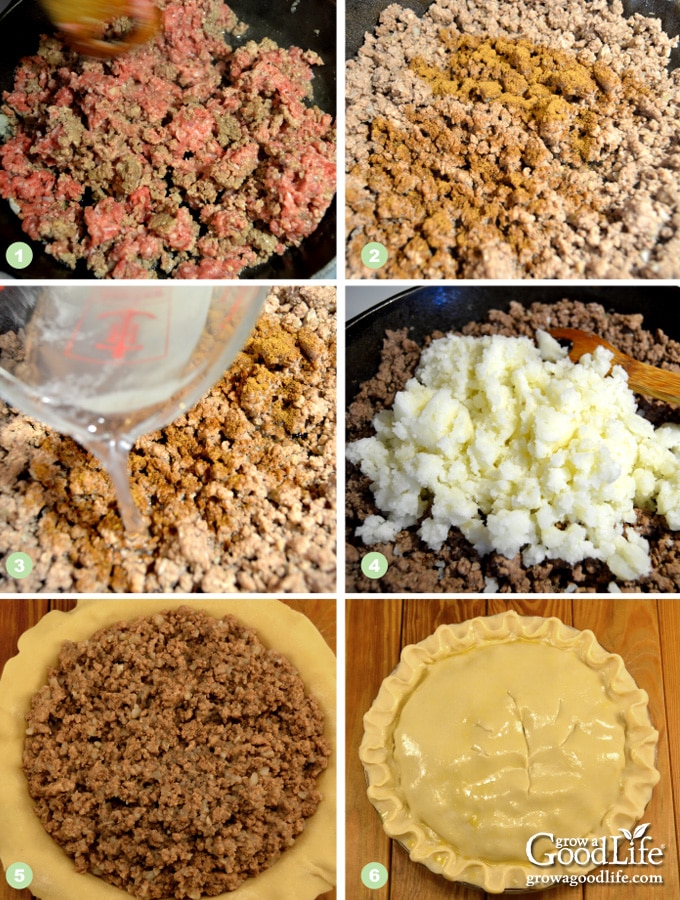 To make the tourtière filling:

Step 1. Add the onions, garlic, ground beef, and ground pork to a skillet over medium heat. Cook until the meat is no longer pink. Drain off any excess fat.

Step 2. Combine the seasonings in a small bowl and add to the meat mixture in the skillet.

Step 3. Add the reserved potato water. Mix well and simmer until the liquid has evaporated.

Step 4. Turn off the heat and stir in the mashed potatoes. Let it cool as you roll out your pie pastry.

Step 5. Place the bottom pastry into the pie plate and add the meat filling. Brush around the outer edge with beaten egg and add the top pastry. and place on top of the filling.

Bake in a preheated oven until the pastry is golden brown. Let is cool for about 10 minutes, and serve warm with lots of ketchup. 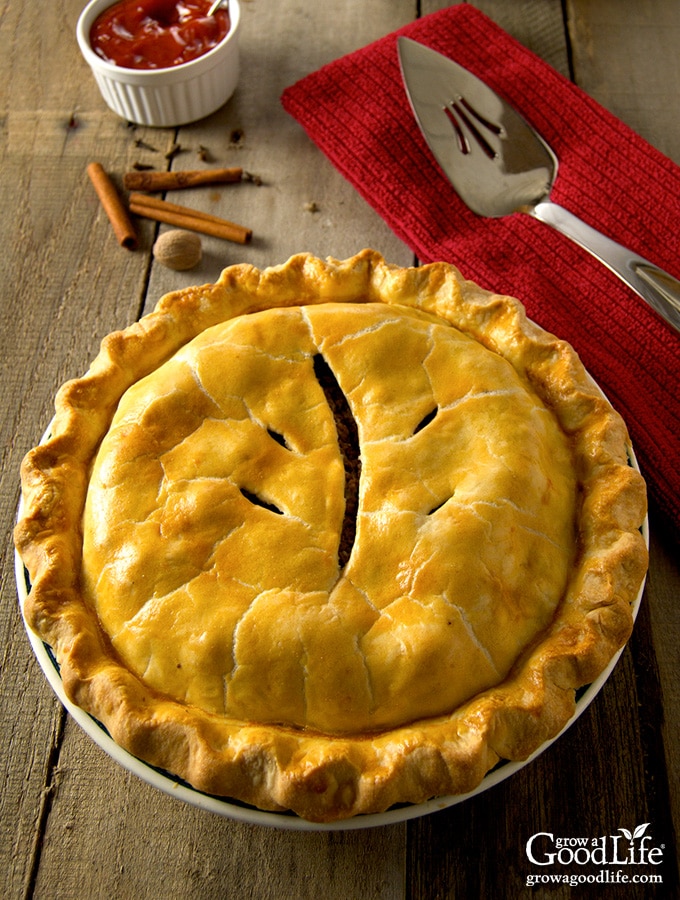 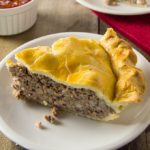 Tourtière, also known as pork pie or meat pie, is a combination of ground meat, onions, spices, and herbs baked in a traditional piecrust.

This recipe was originally published on December 14, 2015. It has been updated with additional information, photos, and video. 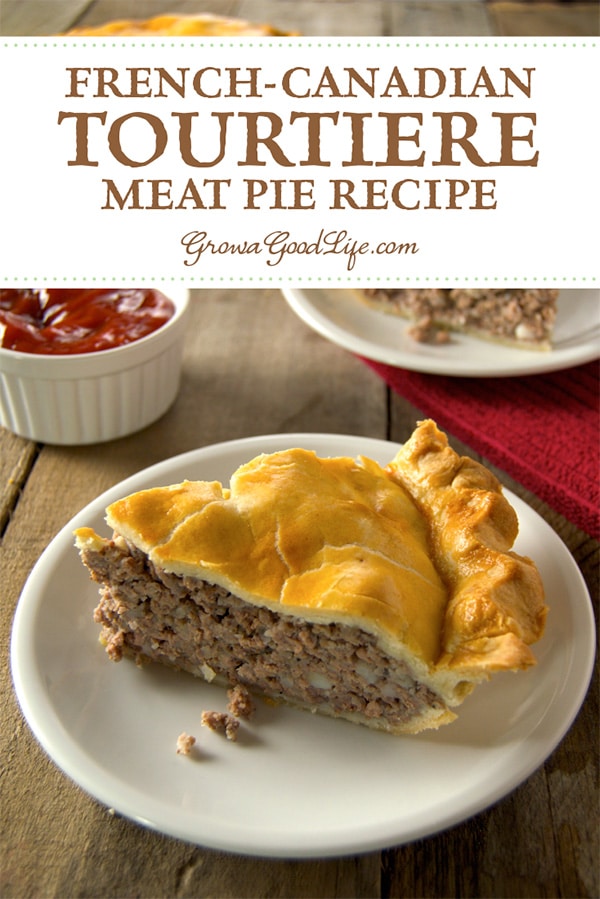 All content is ©2020 Rachel Arsenault Grow a Good Life Media. Please feel free to link to or Pin any of these posts with credit and a link back, but do not copy, take images, or content from this site without my permission. For more info: Syndication and Use of Article