Once your vegetable garden is planted and flourishing, it is time to think about succession planting in order to keep the beds producing throughout the growing season. 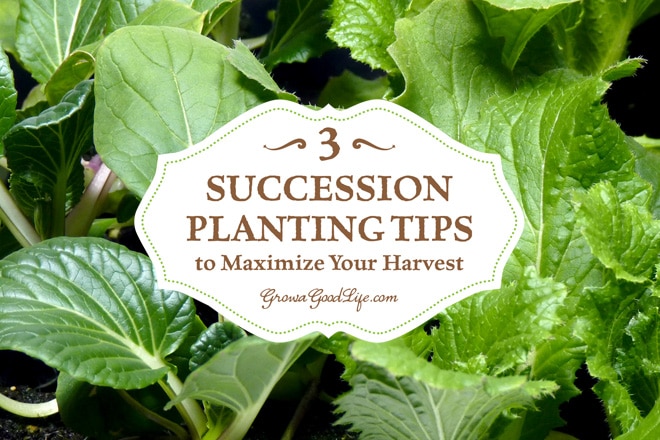 Even though our Maine, Zone 5 gardening period is relatively short, there are plenty of quick maturing crops that will maximize harvests all season long.

What is Succession Planting?

1. Staggered Planting: Planting the same crop every few weeks so the vegetables produce a continuous harvest over a period of time. Instead of maturing all at once, a new crop will be ready as the earlier one finishes. Ideal crops for staggered planting include Asian greens, beets, bush beans, carrots, cucumber, leaf lettuce, radishes, kohlrabi, and summer squash.

2. Companion Planting: Companion planting is interplanting two or more crops with different maturity dates together at the same time. One fast maturing crop that grows and is harvested before the second crop needs the space. For example, sow radish seeds around your squash plants. The radishes will mature before the larger vines shade them out.

3. Harvest and Sow: Growing different vegetables in the same space over the gardening season. When one crop is finished, replace it with another crop. For example, after the spring salad greens are finished, pull the plants, add some compost, and reseed with bush beans. Once the bush beans are finished, replace with another round of quick maturing salad greens to grow in the cooler fall weather.

4. Same Crop, Different Maturity Dates: Planting several varieties of same crop that mature at various times provides uninterrupted harvest throughout the growing season. Potatoes are usually categorized as early-, mid- and late-season. Different varieties of corn have different days to maturity. When these are planted at the same time, the varieties mature one after the other over the season.

My Zone 5 succession planting begins in early spring with cool season crops such as lettuce, spinach, Asian greens, and other salad greens started under lights and transplanted to the garden. Other early spring crops that can be directly seeded in the garden are carrots, radish, and beets. Most of these plants will mature in 30-60 days. Once these finish, another crop can take their place.

As the growing season transitions to frost free nights, warm weather crops can replace the spring crops. Even with our short summers, some warm-season crops such as bush beans, summer squash, and cucumbers, can be succession planted three to four weeks apart and still have time to mature before first frost. When the older plants begin slowing down or are affected by disease, the newer plantings begin producing.

As late-summer weather cools, and the summer crops finish, the space is replaced with cool season plants can withstand light frosts, thrive in shorter daylight hours, and tolerate in the cooler nighttime temperatures of fall. Again, we rely on lettuce, spinach, Asian greens, and other salad greens started as transplants and planted into the garden as space opens up.

Here are some of the succession planting strategies that I use in my Maine, Zone 5 garden: 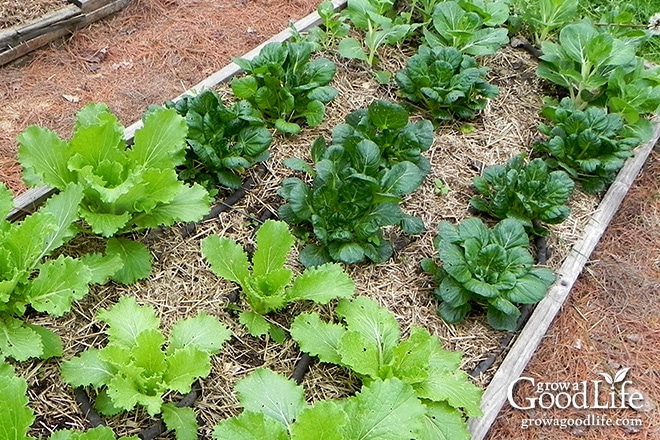 Tatsoi, Pak Choi and other Asian greens are ready to harvest in as little as 45 days.

While some growing beds are devoted to growing one major crop all summer until frost, others are planted with seasonal or quick maturing crops that finish sooner. I like to think of these growing beds as transitional beds. Once a crop in a transitional bed is finished, the plants are pulled; the bed is enriched with some compost, and the next quick maturing crop is transplanted or sowed for the following season.

Choosing varieties that mature quickly is key to succession planting. The earlier the plants grow and produce a harvest, the sooner they can be replaced with another crop. Some varieties mature earlier than others. For example, Mokum, Napoli, and Nelson Carrots can be harvested in as little as 50 days while others, including Danvers, Scarlet Nantes, and Sugarsnax take an extra 20 days to reach maturity. 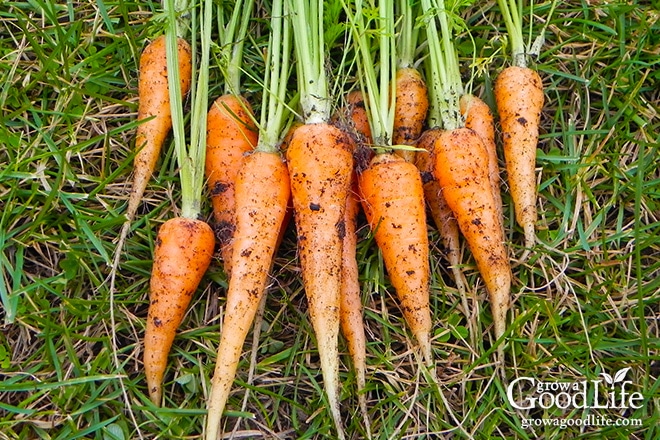 Carrots can be harvested at baby stage or left to grow to fully mature.

Bush varieties of beans and peas produce quicker because they don’t need additional time to grow long vines. They also tend to yield all at once making it easy to preserve too. Check the seed packages for the estimated maturity date.

You don’t have to wait for a crop to be finished in the garden before starting the next succession planting. Sowing seeds and growing seedlings in pots and trays can give them a head start. When space opens up, you can transplant healthy seedlings instead of sowing seeds. 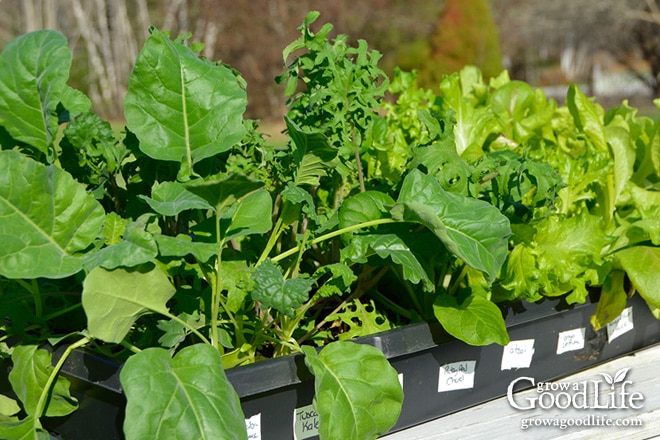 Sowing seeds and growing seedlings in pots and trays can give them a head start.

Some seeds will not germinate when it is hot. Start these under lights indoors, harden off, and plant into the garden when the weather is cooler. Water well and shade the transplants in the heat of summer. See How to Build a Grow Light System and How to Harden Off Seedlings.

Succession planting will allow your garden to produce not only through the spring and summer months, but also into late fall and winter. Using cold frames, hoops and growing under protection can extend the growing season well into winter and give you a head start in early spring.

Challenge your growing season and prolong it by starting seeds in early spring inside under lights and transplanting them to the garden under protection. Rely heavily on hardy crops such as Cole crops, kale, spinach, lettuce, and other resilient greens that can withstand cool temperatures and light frosts of early spring. See: How to Build a Grow Light System. 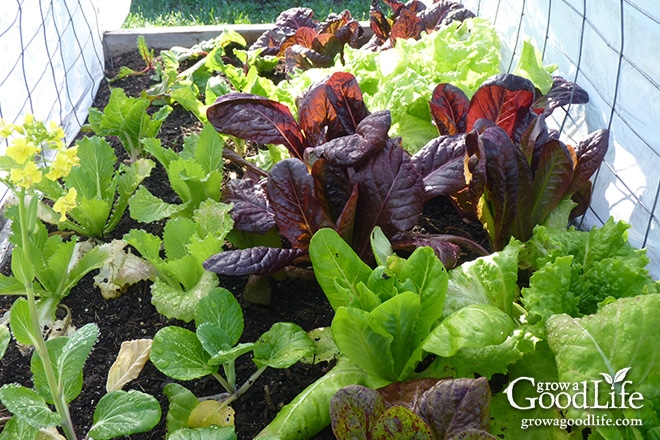 Start the fall garden early by sowing seeds in July to be transplanted into the garden as the summer heat fades and gardening space opens up. Take into consideration that daily sunlight hours decrease in fall slowing the plants’ growth. So add a week or two to the expected maturity date on the package.

I hope by sharing some of these succession-planting tips you are motivated to think of creative ways to maximize your garden harvest.

Succession planting is just one strategy to make the most out of our growing season, here are several more for you to explore: 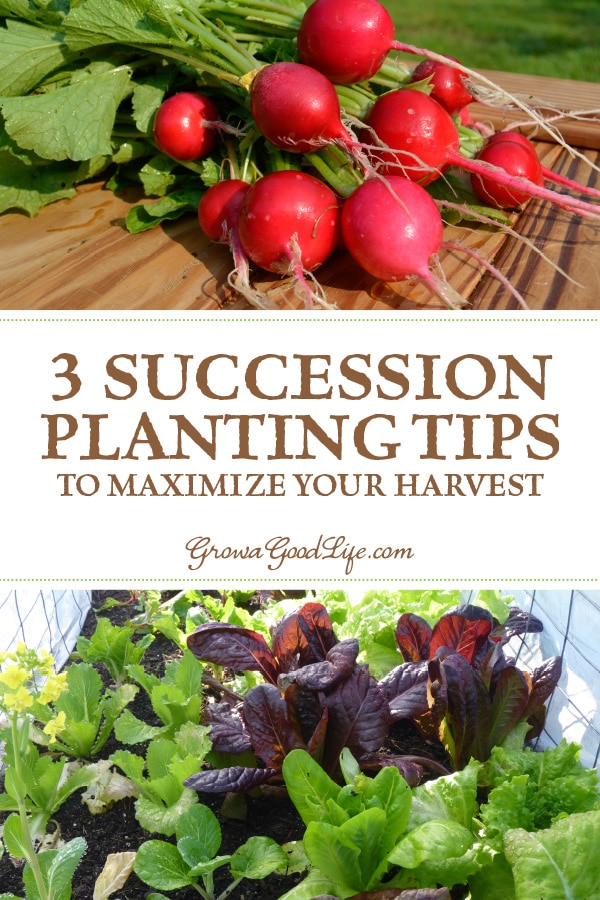