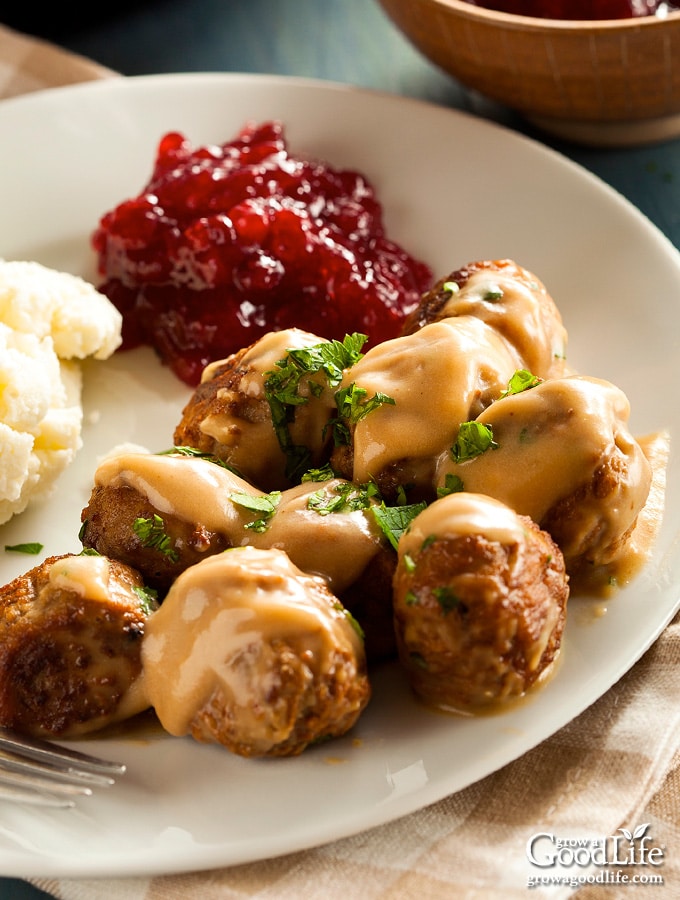 Our family has been enjoying Swedish Meatballs long before Ikea made them popular. When I was a child, my father brought home many recipes from the office. One recipe that became a family favorite was Swedish Meatballs (Svenska Köttbular).

Yes, this is an American-ized version of Swedish meatballs, but we did have an established Scandinavian community with deep roots in our hometown.

Beginning in the 1840s, Scandinavian immigrants building the Atlantic and St. Lawrence Railroad decided to settle in Berlin, NH and find more permanent work in the mills. Many became lumberjacks and worked the woods as sawyers or river drivers.

They established their own community called, Norwegian Village where they built homes, started families, and continued their customs, religion, language, and even established the oldest ski club in North America. By 1900, this community was occupied by hard working Norwegians, Swedes, Finns, Danes and their families. Descendants are still a part of the community to this day.

I’d like to think this Swedish meatballs recipe that my father brought home many years ago came from someone’s Swedish grandmother.

Not only did this recipe list the ingredients for making Swedish meatballs, but also techniques to achieve a soft, melt in your mouth meatball:

The recipe specifically required that the meat be ground three times using a fine blade of a meat grinder. You see, back then ground meats from the butcher were very coarse and included small chunks of meat and fat. Although ground beef served well for Italian meatballs simmered all day in tomato sauce, meatloaf baked for an hour in the oven, and Chinese pie, it didn’t yield a tender and pillowy meatball that was essential for classic Swedish meatballs in creamy gravy.

This recipe was the reason my parents purchased their first meat grinder. Each time we made the recipe, we would faithfully grind the meat three times. I remember it well, because I would stand on a chair and help push the meat through the grinder with a wooden stomper.

You don’t have to worry about grinding the meat three times for this recipe since today’s ground meat is much different. But if you are grinding your own meat, go ahead and run it through three times using a fine blade.

The recipe says to mince the onion very fine. For a soft, melt in your mouth meatball, the onion needs to be almost liquid so the flavor infuses the meat, but there are no chunks in the meatballs.

The easiest way to get the onions to be undetectable is to grate the onion using the small holes of a box grater.

The recipe states to use white bread with crusts removed and soaked well in milk. This is the key to a moist and tender meatball. When meat is cooked, the proteins contract and squeeze out moisture resulting in a crumbly and dry meatball. Combining the ground meat with a starchy paste coats the proteins and holds in moisture.

Before adding the meat, we are going to soak the bread with the other ingredients so the flavorings infuse the meatballs.

How to Make Swedish Meatballs

Place a grater into a large bowl, and grate the onion into the bowl using the small holes. Add the milk, scrambled egg, salt, pepper, nutmeg, and mix to combine.

Remove the crusts from the bread, tear it into chunks, and toss with the milk mixture. Save the crusts to make homemade breadcrumbs.

Let the mixture sit until the bread absorbs the liquid and becomes soft. Once softened, mash it with a fork until it forms a thick paste.

Add the ground beef and ground pork to the bowl and mix well with a fork until combined. 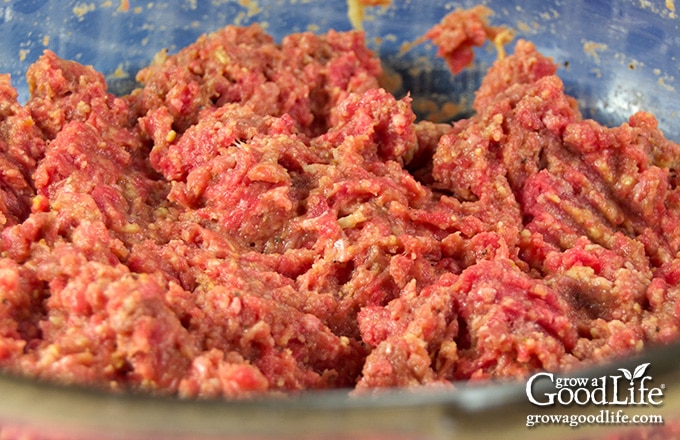 Preheat a large skillet over medium heat. Add a pat of butter to the preheated skillet. Shape the meat mixture into 1-inch sized meatballs and drop into the skillet as you work. 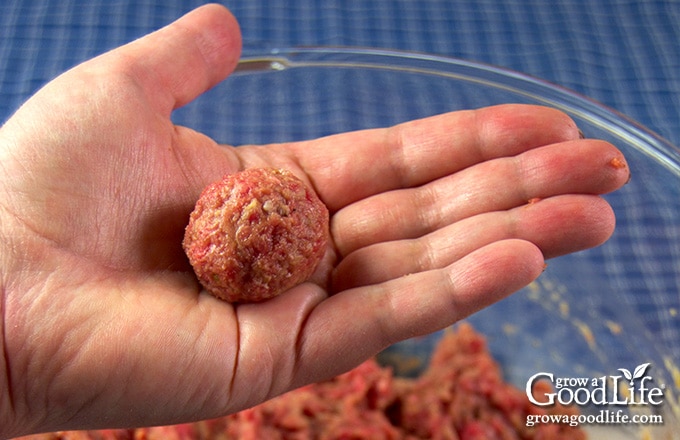 Pan sear the meatballs turning frequently to lightly brown all sides. Remove the meatballs from the skillet, place on a plate, and set aside. 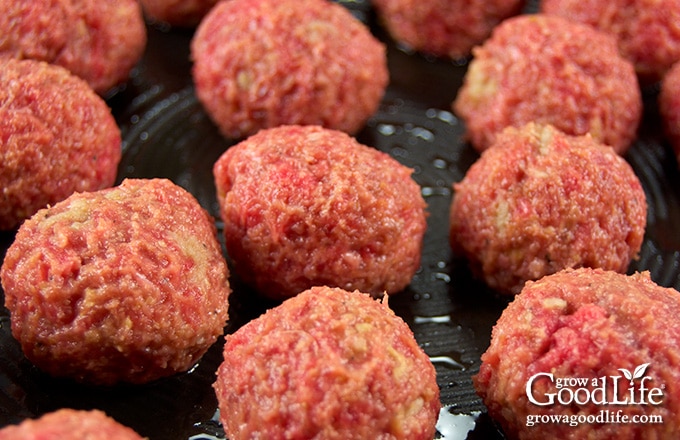 Keep about 2 tablespoons of the buttery drippings in the skillet and spoon out any extra. Add the flour to pan drippings and stir into the fat and brown slightly. 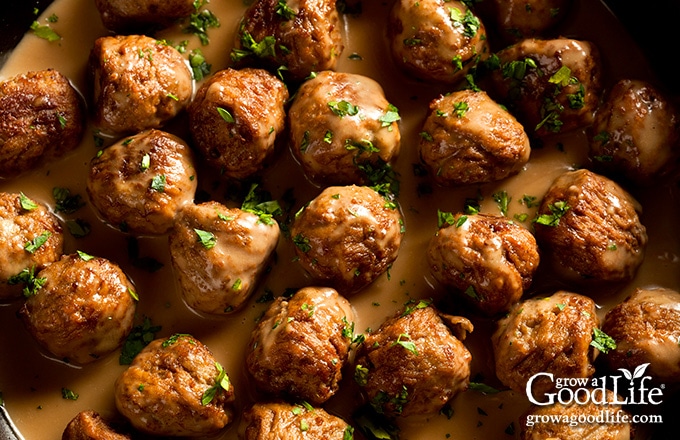 Serve the Swedish meatballs along with a generous spoon full of gravy. Sprinkle with parsley if desired.

Brown Gravy Variation: The original recipe had a brown gravy rather than a creamy sauce made with milk. Instead, it called for water, one beef bouillon cube, salt, pepper, and thickened with flour. Today’s commercial bouillon cubes often contain MSG and other questionable ingredients. If you want a brown gravy for your Swedish meatballs, replace the milk in the recipe with a flavorful beef stock.

What to Serve with Swedish Meatballs

We don’t have lingonberries here in New England, but we do have a close cousin, cranberries. Cranberries have a similar tartness to lingonberries, although they are less sweet. Cranberry sauce still provides a nice tart flavor that cuts the richness of the cream sauce.

My favorite way to serve Swedish meatballs is with fluffy mashed potatoes, cranberry sauce, and a salad garnished with cucumber pickles.

Swedish meatballs and creamy gravy can be spooned over egg noodles or rice. They also make a great appetizer pierced with pretty toothpicks and displayed on a platter smörgåsbord style. 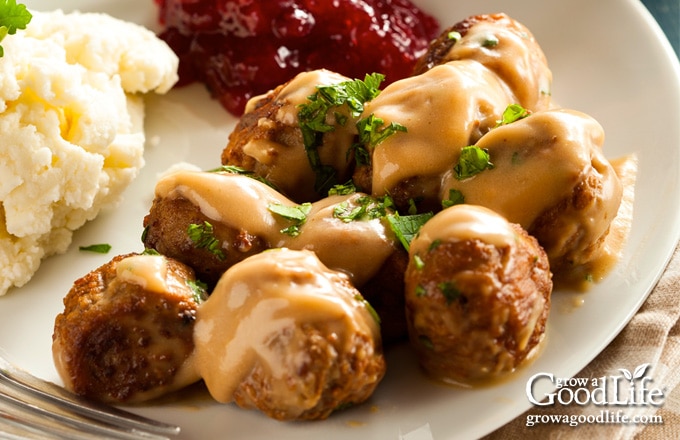 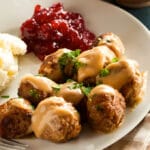 Brown Gravy Variation: Replace the milk in the recipe with more beef stock if you want a brown gravy for your Swedish meatballs instead of a creamy sauce. 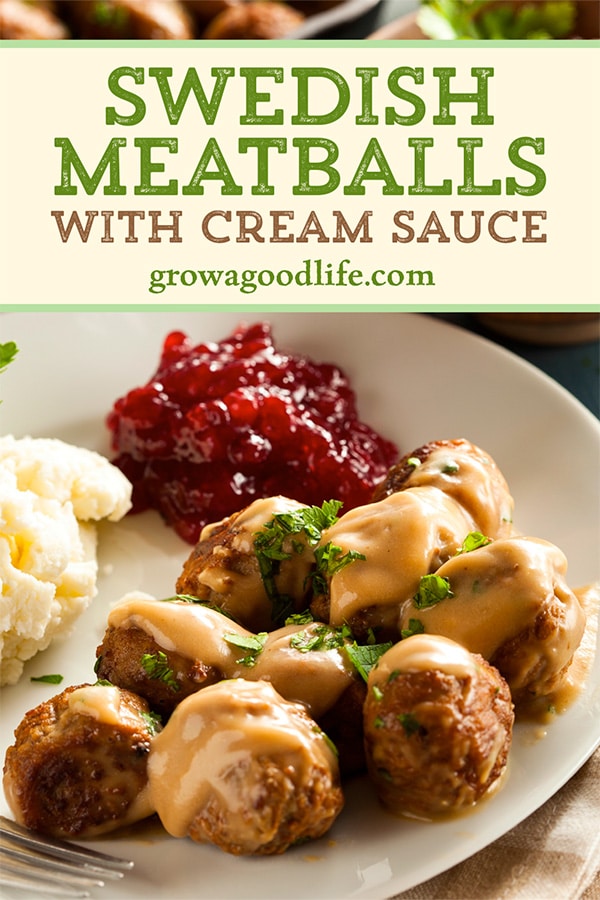