The latest illness Millie suffered several weeks ago turned out to be a UTI and she once again responded to treatment and is feeling much better. Earlier this week she was doing something she loves: rolling in the snow:

Loving and caring for animals is easy. Dealing with sickness, age, and eventual death sucks. That is why we treasure each and every day that Millie is feeling good and enjoying life.

We were blessed to have Millie join our household mid-November 2011. Kevin’s mother, Millie’s previous owner took great care of her until she became ill and eventually passed away. Millie arrived very in poor health and in grief. To be honest, at the time we didn’t think she had much time left in this world. Both Kevin and I were determined to make the best of the time she had left and immediately lavished her with love and attention. “You can stay as long as you like.” is something I say to her often. Although we have had our ups and downs, Millie is still with us and can truly stay as long as she is living a quality life. 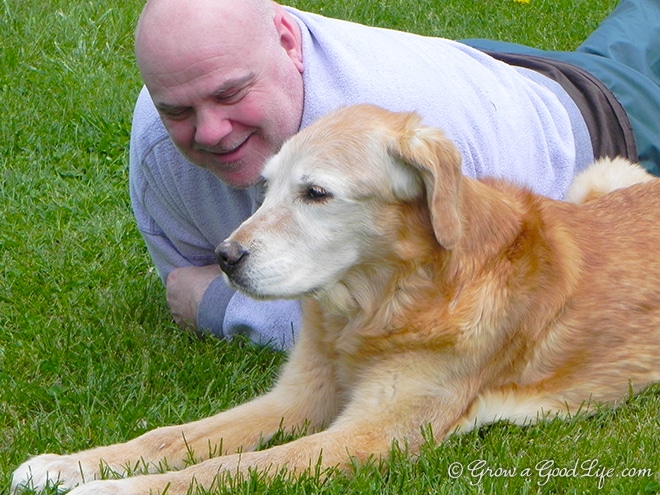 Most of Millie’s immediate health issues were due to allergies. Turns out she was allergic to her food, grass, and other unknown things. She suffered from ear and blood infections due to allergies. We were able to control and correct most of the issues that made her sick by transitioning her to new food and medication. Her hearing, eyesight, and overall bodily stiffness improved. 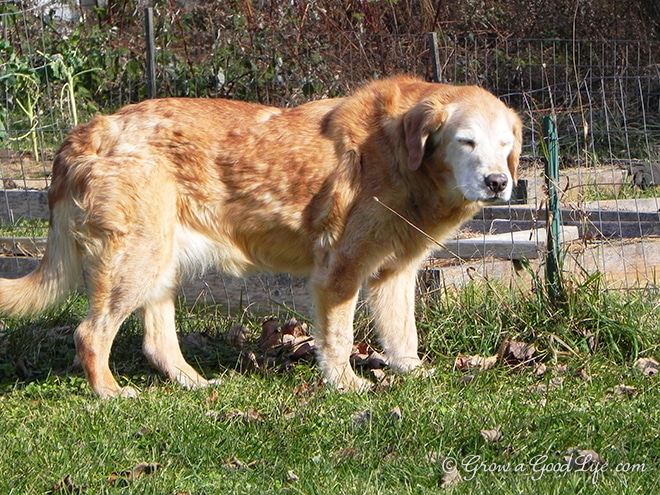 Millie when she first arrived and explored her new yard.

Millie, like most Goldens also suffers from Lipomas or fatty cell tumors. She had one on her paw that opened up and became infected. Under out vet’s instructions, Kevin cleaned and dressed the paw for several months before our vet attempted to cauterize the wound that refused to heal. The surgery didn’t go as expected and they ended up removing the tumor that they didn’t think they could remove. The paw healed and Millie continued to enjoy the good life in our household. She has a few other lipomas on her body. Right now there is one on her elbow that we are keeping bandaged up so she won’t get at it. 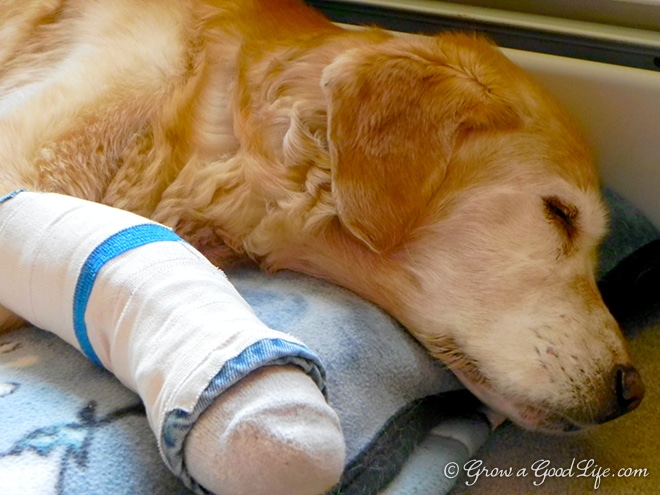 Millie also has Hyperthyroidism (overactive thyroid). This is not typically seen in dogs. Unfortunately, an overactive thyroid in a dog is usually a sign of thyroid carcinoma, a cancerous thyroid tumor. Some of the symptoms that Millie experienced were extreme hunger, weight loss, increased thirst, frequent urination, rapid breathing, restlessness, hyperactivity, irritability and a dull-looking, untidy coat. Our vet is treating the symptoms with medication. So far the medication is allowing Millie to feel much better.

So far, we have managed to control Millie’s health issues so she can live comfortably. Unfortunately, it doesn’t take much to shift the balance. Each time we are faced with a health issue and think, “Oh boy, this might be it,” Millie bounces back. We joke often that as long as she is eating, drinking, and generally feeling ok, we will keep patching her up. I don’t even want to think of the amount of money we have spent on vet bills and medication. Some times you have to do what you have to do.

Previous Post: « How to Pre-Sprout Seeds for Faster Germination
Next Post: 10 Benefits of a Square Foot Garden »